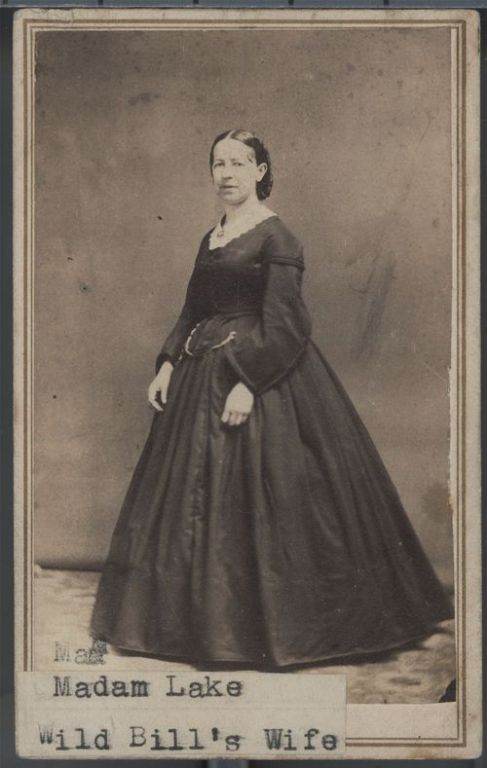 Wild Bill Hickok’s name has been linked to Calamity Jane, but his wife’s name was Agnes Thatcher Lake.

Agnes was born in France but when her mother died the family moved to the U.S.  At age 16, this impetuous young woman married a circus clown.  She and her husband, Bill Lake, toured with the circus for thirteen years.  Her specialties were tightrope walking, lion taming and trick riding.  In 1869, her husband was shot to death while trying to aprehend a man who was sneaking into the circus.  The gutsy Agnes took over management of the circus and it continued to tour.

In 1871 Agnes met Wild Bill Hickock while Bill was town marshal of Abilene.  They met again when Bill was touring with Buffalo Bill Cody’s Wild West Show.   Both shows were performing in Rochester, New York at the time.  Agnes sold the circus when her daughter eloped with another circus man.  This made her a very wealthy woman.

Although Agnes and Bill Hickock seemed to maintain correspondence they didn’t see one another again until Febrary 1876.  Bill had been living in Cheyenne and was preparing to leave for Deadwood when she stopped in Cheyenne to visit friends.  They were married at the First Methodist Church of Cheyenne.  Next to the record of the marriage the pessimistic minister made the note “Don’t think he meant it.”  Although Bill was 39, he gave his age as 46.  Agnes was 11 years older than Bill.

The couple honeymooned in Cincinnati for two weeks and she stayed on to help her daughter who was about to give birth.  Bill returned to Cheyenne by train and then headed to Deadwood in June.  Two weeks after his last letter to Agnes he was shot to death in a Deadwood saloon.

Agnes went to Deadwood in September, 1877, to have a fence erected around Bill’s grave.  She then stopped in Cheyenne and is said to have married her escort, George Carson.  Records show that this remarkable lady was no longer 42, as listed the previous year, but 38 (we should all be so lucky).  The gentleman in question was 29.  While a certificate was filed, there is no record that the marriage actually took place.  She is said to have retired and lived in Cheyenne but there is no further mention of the young man she was said to have married.

Error: Twitter did not respond. Please wait a few minutes and refresh this page.